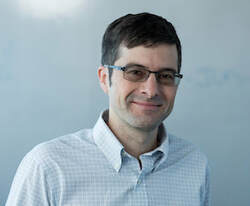 Nathanael Gray, PhD, is the Nancy-Lurie Marks Professor of Biological Chemistry and Molecular Pharmacology at Harvard Medical School and the Dana Farber Cancer Institute. Nathanael leads the Dana Farber Program in Chemical Biology and manages a research laboratory. Previously, Nathanael was the Director of Biological Chemistry at the Novartis Institute for Genomics (GNF) in San Diego where he supervised a group of over fifty researchers integrating chemical, biological and pharmacological approaches towards the development of new experimental drugs including ceritinib, siponimod and ABL001. Dr. Gray received his PhD in organic chemistry from Professor Peter Schultz at the University of California at Berkeley in 1999 after receiving his BS degree with the highest honor award from the same institution in 1995.

​Nathanael has pioneered pharmacological approaches to inhibit protein kinases that become dysregulated in cancer and other diseases. His research has advanced chemistry and biology and has transformed medicine. His development of innovative strategies for kinase inhibition has enabled discovery of first‐in‐class inhibitors that have become widely used as tools to elucidate kinase function in biological systems and resulted in the development of clinical candidates and approved drugs. Nathanael also pioneered the development of covalent compounds that target unique cysteine residues to achieve selectivity across the approximately 520 human kinases. He developed the first ATP‐competitive inhibitors of mTOR that were used to discover that mTOR regulates protein translation and cell growth more profoundly than previously anticipated. While conventional kinase inhibitors target the nucleotide binding pocket, Nathanael discovered allosteric inhibitors of BCR‐ABL that are being used to treat Chronic Myelogenous Leukemia ﴾CML﴿. Nathanael discovered that a subset of patients with lung cancer harbor an EML4‐ALK fusion protein and developed the first drugs against this target, one that is a marketed drug. Following this, Dr. Gray developed the concept of ‘mutant‐selective’ kinase inhibitors which resulted in the development of a new class of EGFR inhibitors currently approved for the treatment of lung cancer. Nathanael contributed to the development of the concept of ‘transcriptional addiction’, the need for certain cells to maintain a high level of transcription of specific genes and has identified kinases that are critical to this process and therefore represent a new type of molecular vulnerability for specific cancers. Nathanael has contributed to the field of small molecule induced protein degradation and has developed new strategies and approaches for efficiently discovering new degrader molecules.
​
These contributions have been recognized through numerous awards including the National Science Foundation’s Career award in 2007, the Damon Runyon Foundation Innovator award in 2008, the American Association for Cancer Research for Team Science in 2010 and for Outstanding Achievement in 2011 and the American Chemical Society award for Biological Chemistry in 2011, and the Nancy Lurie Marks endowed professorship in 2015.
Back to Leadership
HOME | LEADERSHIP | NEWS | JOIN US | CONTACT

©2019 The Center for Protein Degradation at Dana-Farber Cancer Institute